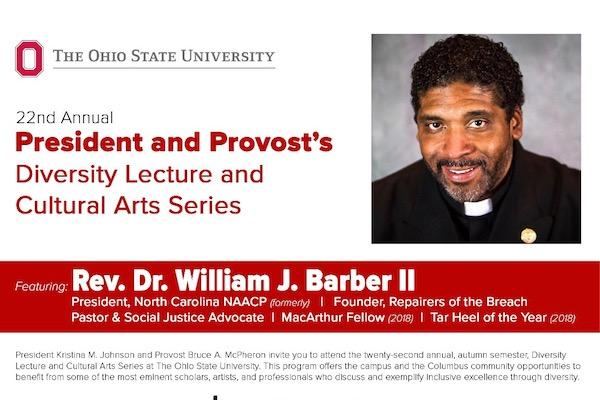 CEHV is proudly co-hosting a lecture by Rev. Dr. William Barber II for the 22nd Annual President and Provost’s Diversity Lecture and Cultural Arts Series from the Office of Diversity and Inclusion.

The event will be held online via Zoom (Zoom will open at 4:50 pm).

It is free and open to the public, but registration is required. To register visit: go.osu.edu/revbarber

Rev. Dr. William J. Barber II is a pastor and social justice advocate building a broad-based grassroots movement grounded in the moral tenets of faith-based communities to confront racial and economic inequalities in America today. As pastor of the Greenleaf Christian Church in Goldsboro, NC (since 1993), and president of the North Carolina NAACP (2005-2017), Barber approaches social justice through the lens of the ethical and moral treatment of people as laid out in the Bible, the Reconstruction, the Civil Rights Movement, and the US Constitution.

Rev. Barber has built inclusive multiracial/interfaith coalitions that reach across gender, age, and class lines, and are dedicated to addressing poverty, inequality, and systemic racism. He also launched a series of "Moral Monday" rallies outside of the NC Statement to protest laws that suppressed voter turnout, cut funding for public education and health care, and further disenfranchised poor white, black, First Nations, and LGBTQ communities.

Barber founded Repairers of the Breach (2014), a national, morally-grounded leadership development organization. In 2016, he led a moral revival tour that covered 26 states. In 2017, he and colleagues launched a revival of the 1968 Poor People's Campaign that was spearheaded by Rev. Dr. Martin Luther King, Jr.

Dr. Barber's publications include the co-authored books Forward Together: A Moral Message for the Nation (2014), The Third Reconstruction: Moral Mondays, Fusion Politics, and the Rise of a New Justice Movement (2016), and Revive Us Again: Vision and Action in Moral Organizing (2018), and he is also a contributing op-ed writer for The New York Times, CNN, MSNBC and The Washington Post.