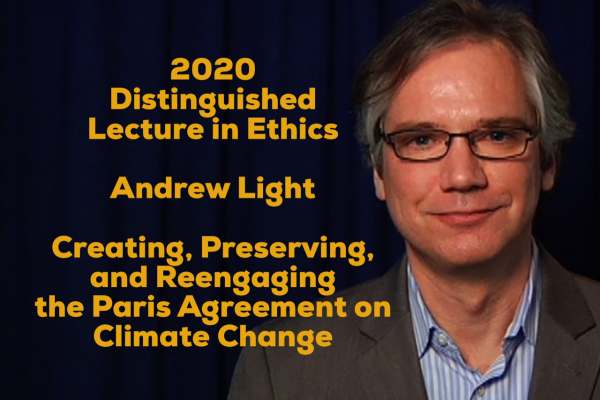 CEHV is pleased to announce that environmental philosopher and climate policy strategist Andrew Light will deliver the 2020 Distinguished Lecture in Ethics, "Creating, Preserving, and Reengaging the Paris Agreement on Climate Change". Professor Light is a University Professor of Philosophy, Public Policy, and Atmospheric Sciences at George Mason University and Distinguished Senior Fellow of the Climate Program of the World Resources Institute.

The Distinguished Lecture in Ethics series welcomes to campus thinkers who have been influential outside of the academy in addition to having made groundbreaking contributions to ethics or political philosophy. Past speakers include Amartya Sen, Jan-Werner Müller, Elizabeth Anderson, and Danielle Allen.

This year's lecture is co-hosted by Ohio State's School of Environment and Natural Resources (SENR), and honors the 50th anniversary of Earth Day.

"Creating, Preserving, and Reengaging the Paris Agreement on Climate Change"

In December 2015 over 190 countries met in Paris for the 21st meeting of the United Nations Framework Convention on Climate Change where they succeeded in creating a new and ambitious international climate agreement. Many have heralded the outcome as a groundbreaking achievement for international diplomacy and global climate action. Others have argued that the climate commitments in it are ultimately too weak to achieve the agreements’ lofty aspirations.

On June 1, 2017, President Donald Trump announced the intention of the United States to leave the Paris Agreement, a process that will be completed on November 4, 2020, one day after the U.S. election. Former Vice President Biden has promised to rejoin Paris if elected, as soon as inauguration day in January.

To better understand the significance of the agreement, and its value, we will review the recent history of the UN climate negotiations, and how this outcome evolved from earlier failed attempts in this process, finally overcoming the immense hurdle of justly assigning responsibility for hitting global emission reduction targets. If President Trump wins, we will look at what the future holds for global climate cooperation in a world without the participation of the U.S. federal government. If Vice President Biden wins, then we will examine the steps toward U.S. reengagement in this process, as well as the prospects for future U.S. leadership on climate change.

Andrew Light is University Professor of Philosophy, Public Policy, and Atmospheric Sciences, and Director of the Institute for Philosophy and Public Policy at George Mason University.  He is also a Distinguished Senior Fellow in the Climate Program at the World Resources Institute in Washington, D.C., and a Faculty Affiliate at the Center for International Environment and Resource Policy at Tufts University.  He works primarily on international climate policy and governance (especially bilateral U.S. cooperation with India and China, comparative ambition, and mitigation of short-lived climate pollutants), normative dimensions of environmental policy, governance of emerging technologies, and risk analysis.

From 2013-2016 Light served as Senior Adviser and India Counselor to the U.S. Special Envoy on Climate Change, and as a staff member in Secretary of State John Kerry's Office of Policy Planning in the U.S. Department of State. In this capacity he was on the senior strategy team for the UN climate negotiations, directed the U.S.-India bilateral climate change working group, led the office's efforts on climate-smart agriculture, and chaired the U.S. government's interagency working group on climate change for the creation of the Sustainable Development Goals, among other issues.

In his academic work, Light is the author of over 100 scholarly articles and book chapters, and has authored, co-authored, and edited 19 books including Environmental Values (Routledge, 2008), Moral and Political Reasoning in Environmental Practice (MIT, 2003), Technology and the Good Life? (University of Chicago, 2000), and Environmental Pragmatism (Routledge, 1996).