Online Event: "From Protest to Policy: How Does the Movement Sparked by George Floyd’s Death Ensure Lasting Change?" (Cosponsored with IDEA) 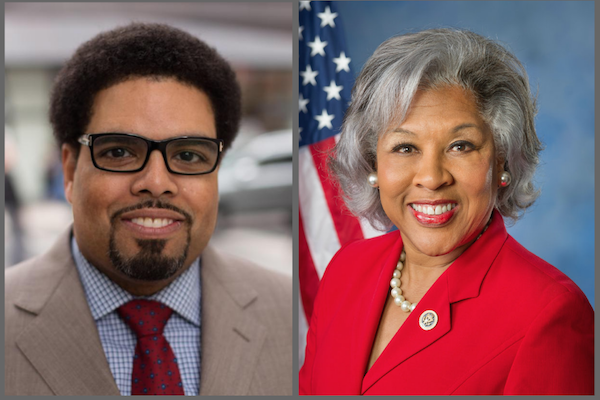 The Ohio State University's Institute for Democratic Engagement and Accountability (IDEA) and Center for Ethics and Human Values (CEHV) are proud to host US Representative Joyce Beatty (OH-3) and Dr. Darrick Hamilton of Ohio State's Kirwan Institute for the Study of Race and Ethnicity as keynote speakers for a panel discussion “From Protest to Policy: How Does the Movement Sparked by George Floyd’s Death Ensure Lasting Change?”

This online event will feature remarks by Congresswoman Beatty and Dr. Hamilton, followed by questions from moderator Dr. Michael Neblo (IDEA/CEHV) on the scale and scope of calls for justice and what the current coalition must do in order to translate this show of public will into lasting change to our system. The event will conclude with questions submitted from the online audience.

See a recording of the full panel discussion below.

Congresswoman Joyce Beatty has represented Ohio’s 3rd Congressional District since 2013, and has been one of the most prominent supporters of the George Floyd Justice in Policing Act in Congress, and other efforts to address systemic racism. She also recently made headlines due to being pepper-sprayed by police at a protest following the death of George Floyd.

“We have all watched with horror the senseless killings of too many unarmed Black men and women—and it is long past time we go from agony to action,” Rep. Beatty said. “The U.S. House of Representatives took a significant step in that direction by passing the George Floyd Justice in Policing Act. However, the work continues to build more trust among law enforcement, communities of color and all Americans. In that spirit, I look forward to joining Dr. Darrick Hamilton for an open, frank conversation with constituents about how we take the energy of now and make meaningful change in the future.”

Dr Darrick Hamilton is the Executive Director of the Kirwan Center for the Study of Race and Ethnicity and a pioneer in the field of stratification economics, studying race and its effect on the health and wealth of individuals and communities of color for over twenty years. His ideas on how to fully address systemic racism throughout our society have become part of the national conversation.

Both Congresswoman Beatty and Dr. Hamilton also have deep ties to The Ohio State University. We therefore could not have two better leaders to offer the Ohio State community their assessment of and guidance on what institutions and individuals can do at this moment to translate the energy of these protests into lasting change.

“As our country grapples with its next steps, we need innovative leaders like Rep. Beatty and Dr. Hamilton to be in conversation about how democratic values like fairness and dignity can inform significant legal reforms and policy changes,” said Dr. Piers Turner, Director of CEHV and co-host of the event.

We hope you’ll join us to hear from them about what needs to be done, how you can help, and how to hold ourselves and other institutions accountable for meeting this moment.